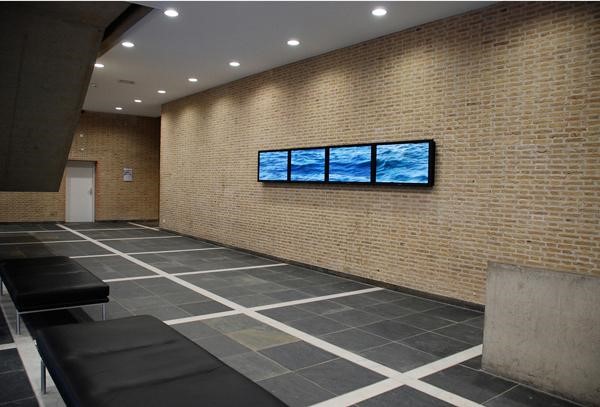 4 channel video for the University of Tilburg

Nature is the teacher of art, is the translation of Natura Artis Magistra, best known in the Netherlands by the Amsterdam zoo Artis. The university has its own version of this saying, in the form of a work of art by Rob Moonen. It has been hanging in the hall of the Goossens building since 2007 and consists of four screens where extremely slow phenomena from nature are shown. The rising of the sun, the rising water, the opening of a flower.

Flowering and decay: Moonen's artwork was initially intended for the Montesquieu building, for the space on the ground floor where there are a large number of workplaces. The idea behind the work was that nature forms a beautiful world with a cyclical character. Flowers open and bloom, but are also doomed to fall, as the sea keeps coming up and eventually retreats. This cyclical character set the tone for world view in many cultures, until we embraced the idea of ​​progress, creating a linear perspective, a premise that "we" are still honoring. The content of Natura Artis Magistra is therefore in line with traditional ideas. In addition, it is good to know that the Latin word Ars (from which Artis is derived) can mean both art and science. Considerations such as these play a role in purchasing such a work for the campus, when a new building is being built, or has been renovated. Benches are set up opposite the work, inviting you to look a little longer and carefully at what nature has to tell us - even if it is in digitized form.

After installation, the work turned out to have unimagined added value. The ladies from the reception in the Koopmans building (which is currently being renovated) turned out to find the path between the two buildings dark and somewhat creepy at night. Moonen's work, which is permanently on, turned out to bring a form of lighting that made the path a lot safer.